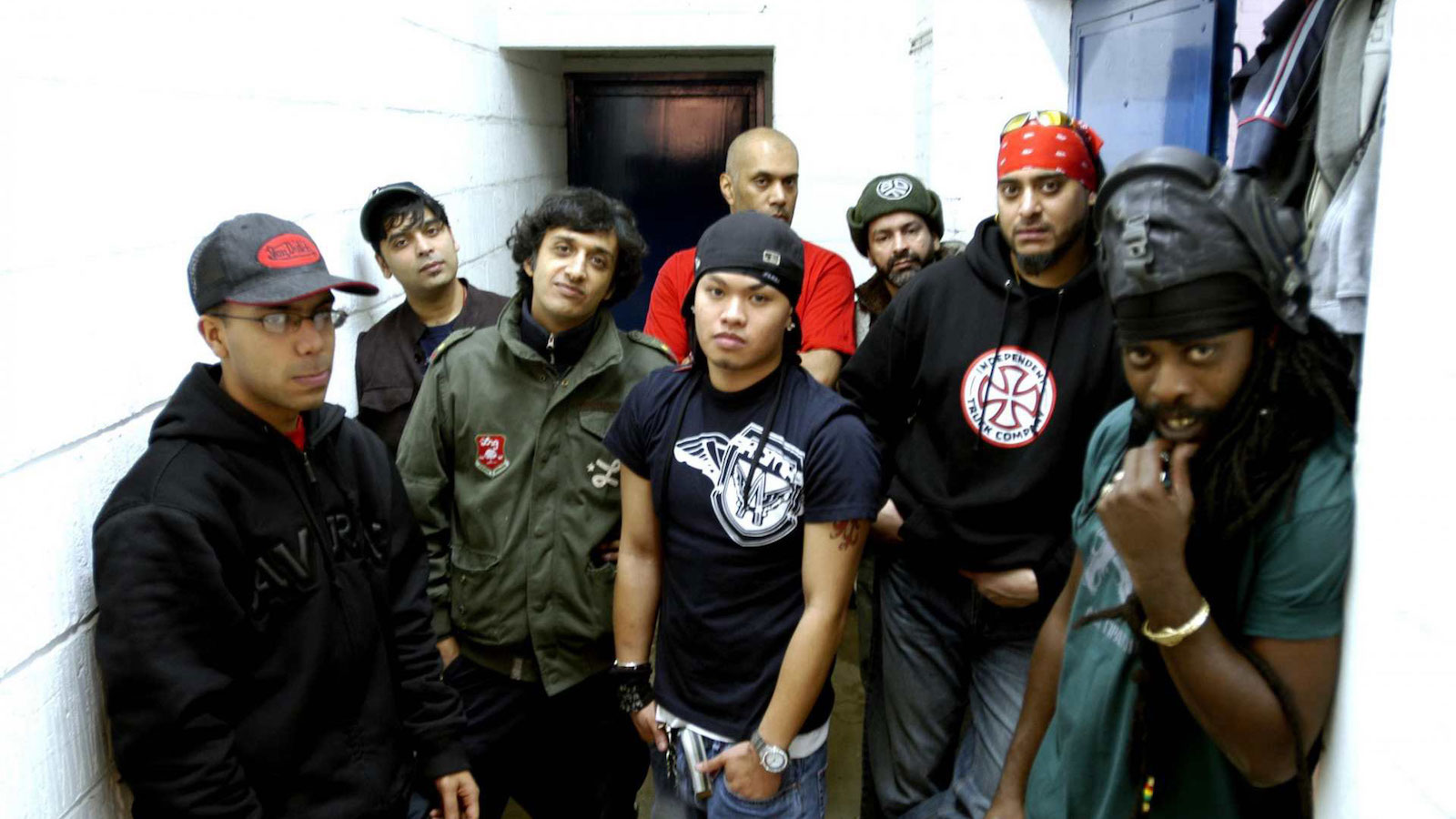 In March 2012 ADFs Steve Savale received a call from Secret Cinema founder Fabien Rigall.He explained how he had attended the first ever screening of ADFs live soundtrack to French film La Haine at Londons Barbican Art Centre and David Bowies Meltdown Festival.
Secret Cinema wished to recreate it.
The proposal was a screening of La Haine with ADF at the notorious Broadwater Farm Estate in North London on the eve of the London Mayoral election.
The previous summer an incident involving the fatal shooting of a Broadwater Farm resident by the police had started a riot that spread all over the country. Similarities to La Haines story of a post riot scenario on a deprived housing estate were obvious. In a short space of time the soundtrack would have to be recreated and it would need the musicians who had played on the earlier events to do this.
Original bass player and ADF founding member Dr Das and drummer Rocky Singh hadn’t played in the band for many years.
They were contacted with a proposal to recreate La Haine and agreed it was an opportunity too good to miss.
The police and local council considered the event too dangerous and tried to ban it.
The event went ahead under heavy security and the reaction was electric. (http://youtu.be/btYJ3f8l81Q)
Two more sold out shows followed at Londons Troxy.(1000 tickets sold in an hour after the show was announced) and the next night a show at La Trianon in Paris on the eve of the French Presidential elections.
La Haines director Mathieu Kassovitz was engaged in a media spat with French President Sarkozy and the event polarised the debate.
Sarkozy was voted out and it felt like history was happening in and around the event.Kassovitz even introduced the event by Skype from Los Angeles. (http://youtu.be/Y4gA0B9Lrxk)
Both shows had an electric atmosphere and at the end of the film the band played on..It felt like the start of something special.
Further UK shows were added at Wilderness and Leeds Festivals.
The newly reformed lineup kept rehearsing. With a fantastic spirit around the events it seemed natural that this should be the start of creating new material.
Dr Das and Rocky Singh were now back full time and with legendary producer Adrian Sherwood at the controls recording began on the new album’The Signal And The Noise‘
Former vocalist Ghetto Priest returned and with Aktarvata and Nathan Flutebox Lee completing the line up the band was complete.
The first live show was Festival Chorus in Paris in April 2013.As the show finished the band knew that this was it.This was the real deal.
The early version of the album was released in Japan in July 2013.
During the rest of 2013 the new line played 25 shows to great acclaim including a show at Asagiri Jam Mount Fuji.Japan.One of the best shows the band have ever played.
As the new line up grew into the new material a decision was made to re record the material from the early version tighter and tougher.
This has now been completed and the definitive version is being scheduled for release on July 10, 2015.
ADF 2015- more powerful than ever.